“This book is not the creation of an academic, an NGO, a senior military officer or a diplomat. This book is instead the account of an outstanding soldier, and that of his courageous peacekeeping comrades who served with him in Rwanda. In my view, soldiers who put their lives on the line to do the job for us deserve the right to describe events from their own erspectives, and in Pure Massacre their recollections are often harsh towards the UN and the whole peace keeping enterprise. The fact that their stories are totally uninhibited by political correctness also makes the account of UNAMIR II a refreshing change.” From the foreword written by Major General (retired) Guy Tousignant. United Nations Force Commander, UNAMIR II.

Pure Massacre is a compilation of perspectives from a group of Australian UN peacekeepers who where sent to Rwanda under a United Nations’ mandate. It describes the horror of the unimaginable atrocities that took place in Rwanda and the impact on these soldiers given their helplessness to stop the killing given their rules of engagement.

Fifteen years ago, on 22 April 1995, at a displaced persons’ camp in Kibeho, in full view of Australian UN peacekeepers, over 4,000 unarmed men, women and children died in a hail of bullets, grenades and machete blades at the hands of the Rwandan Patriotic Army (RPA). Constrained by the UN peacekeeping Rules of Engagement, these Australians could only watch as atrocities they’d never imagined where carried out in front of them knowing that they could not — would not — interfere with these brutal acts.

Up until now, the Australian public have had limited access to first-hand accounts from these soldiers regarding what actually occurred in Rwanda. Author Kevin “Irish” O’Halloran, a Platoon Sergeant at the time, has not only drawn on his own personal experiences, but others who served with him. Before ‘Irish’ and his platoon was deployed to Rwanda, he learnt as much as possible about the long history of bloodshed between the Tutsi people and Hutus, the civil war, the 1994 genocide and the part the UN was playing in trying to rebuild the country, so he knew, or thought he did, what he was getting his men into. It was a daunting picture.

Irish takes the readers with him into his world at “Club Med Kigali”, where there was no running water so bathing became a weekly not a daily occurrence, on daily morning runs through Kigali backstreets passing RPA units with many of the RPA soldiers in a drug-induced state, chanting war songs and feeling invincible, to the escalating tension and violence leading up to the massacre at Kibeho and accounts of the aftermath. He also stresses the weakness of the UN charter and the lack of recognition for those who served during this tragic time.

More than 600 Army, Navy and Air Force personnel from the Australian Defense Force were sent to Rwanda as part of the United Nations Assistance Mission for Rwanda (UNAMIR). The operation was predominately a medical one and their role was to provide humanitarian aid and security for the return of the displaced persons to their homes. However, these Australians would be exposed to a lack of humanity they were not prepared for and found hard to fathom.

It takes a special type of bravery, discipline and compassion to do what these soldiers did. Little did they know, when the second tour of Rwanda was over, that they would be the highest decorated UN peacekeeping contingent since the Korean War.

For many, their service in Rwanda would come with a personal toll. No Australians died during and immediately after the massacre at Kibeho, but as Pure Massacre testifies, the suffering and tragedy is embedded in their memories. Irish expands upon, “We are all obviously very proud of how we performed in Rwanda and believe it’s very sad that people don’t talk much about the operation because it implies that we did something wrong, which we all know is not true. On this 15th Anniversary of Australia’s UN operation in Rwanda, my book aims to serve as a small part of the healing process for those veterans who said how good it was to talk about their experiences there.” 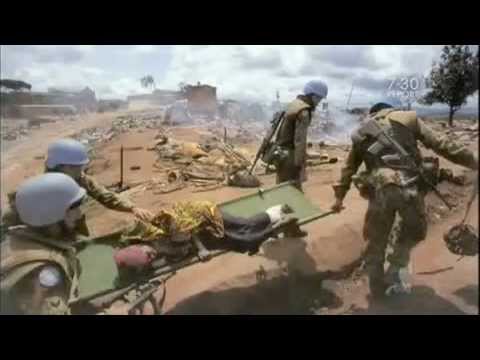